How did the Australian troops celebrate New Year's Eve in Egypt in 1914?  According to Bert Smythe, camped at Mena near Cairo, "seeing the New Year in was rather tame. Lights were not allowed in the tents. The [army] bands turned out & played various Australian airs." 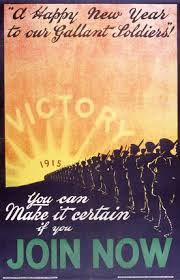 What did everyone want?
Just victory, as this enlistment poster showed?
I'm sure they wanted much more - most likely, time with their families and sweethearts. Later in the war, when Australian soldiers were serving in France, they sent silk embroidered postcards, like the ones here, to their loved ones.


2015
New Year is the chance to start afresh.
For me, it's the beginning of a few weeks' holiday, which in recent years I've spent writing fiction, while also spending time with my teenagers. Isn't it wonderful how they sleep all morning, freeing one to write while ideas are fresh and energy is high? By the time they're up and doing, I'm well on my way to completion of the day's writing goal. ;)


If you're spending time with family, or working on writing projects like me, I hope you enjoy the time you have. Whatever you're planning, may this new year bring you happiness, health and prosperity.
Happy New Year!
Isabella